A family of Master Craftsmen…

When I think of a master craftsman I have this image of a mature cobbler standing there wearing a thick tarnished leather apron working with traditional tools. I imagine them manufacturing the boots to the best of their ability with perfection being their up most goal.

At Zamberlan the handmade boots go through this exact process. You sense their craftsmen have been making boots for them for years. There’s nothing more satisfying then knowing that your boots have had a human eye check and follow them through every part of their manufacturing process… from the first cut of leather, to the closure of the lid on the box… it’s the way you become a specialist in your field. It’s what makes you an artisan.

Giuseppe Zamberlan was the company’s founder and a ‘master craftsman’ in his own right. Like anyone who loves the outdoors he had a passion for ‘his’ local mountain range, the Piccole Dolomiti. After starting a cobbler business in 1929 he took the traditional Italian craft of making shoes, he applied modern manufacturing processes and managed to make a commercially viable footwear production line. This was achieved without sacrificing the benefits from hand making techniques. Giuseppe’s dream was to produce better and more reliable products. He also supported the revolutionary ideas of Vitale Bramani… he was the founder of Vibram®. After working together on ideas and with many days testing in the mountains they created the sole of ‘the future’… this would later replace the existing ones. Through his passion he created the company that we know today. 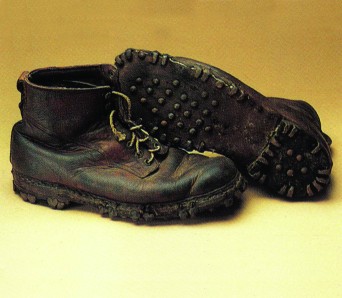 An orginal pair of old hand made boots

Some original tools and a pair of old handmade Zamberlan boots.

In 1970 Giuseppe’s son Emilio took his father’s place and started the process of taking the company from being just a local manufacturer to becoming a recognized company internationally. Emilio realised he needed to break into the export market and began to travel in order to find other customers to sell his boots. Within three years and with a move to better premises at Pievebelvicino. (at the foot of The Mini Dolomites) Zamberlan had successfully broken into the markets of Japan and the UK.

Emilio continued his work and with more innovative ideas such as the MULTIFLEX and BIFLEX midsoles introduced in 1983, the HYDROBLOC® tanning technique that improves the waterproofness of the leather in 1985 and the development of an exclusive sole with the company Vibram® called BIMESCOL in 1988. With these innovations he took Zamberlan to a whole new level of quality and usability. With the introduction of a quick production line the boots became a favourite in the domestic market and wider Europe.

‘DISCOVER THE DIFFERENCE’ became the company’s ethos in 1990 and during the following two years they’d entered the US market and began to produce boots with the revolutionary GORE-TEX® membrane.

In 1999 the decision was made to double the size of the factory and by 2002 Marco and Maria Zamberlan… the third generation,  become involved in the general management of the company. They continue to introduce new innovative ideas, but maintain a respect for the company’s tradition. Like their grandfather and father they have a great passion for the outdoors. Hiking, climbing and mountaineering for their own pleasure gives them the opportunity to test out new ideas and new products.

In 2008, Zamberlan founded its own climbing association (AZA-Associazione Zamberlan Arrampicata) with both indoor and outdoor facilities and climbing walls that are located near its headquarters… to date the association has more than 500 members!

Zamberlan celebrates its 80th anniversary in 2009 with a sponsored expedition to climb the Baruntze in Nepal. The group consisted of Marco and 5 other alpinists.

From 2010 Zamberlan are awarded many international awards… one of which is the OUTDOOR INDUSTRY AWARD 2010. It was won for the TOFANE, this was a model with the new Norwegian Welted construction. That year they also won the prestigious BACKPACKERS’S GEAR GUIDE 2010. 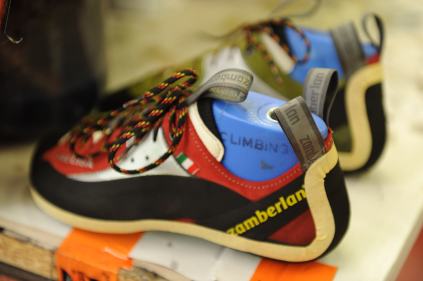 To date Zamberlan continues to grow. With countless awards for their products, a new website in 2015 and the addition of a new production line specifically for the construction of climbing shoes the company focuses on the manufacture of high quality boots made in Italy. The company now exports more than 90% of its production world-wide. Zamberlan’s international presence is now in more than 45 countries. Although the collection continues to change with new technologies, new designs and exciting new colours the company remains focused. Made in Italy, high quality, durability, craftsmanship and innovation… the factors driving Zamberlan to be the best since 1929.

Built on tradition and with products made by an amazing team of master craftsmen, the original family are Zamberlan’s driving force. Although the outdoor market is tough… with their passion and continued efforts, they get successful results. As a world renowned boot manufacture supplying boots to the whole of the outdoor market… including ascents of Everest, they will continue their success and be ahead of the competitors. One thing we can be sure of is more exciting products from Zamberlan in the future…

One thought on “The company ‘Zamberlan’”